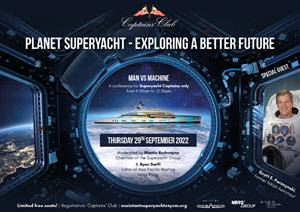 MONACO, Sept. 13, 2022 (GLOBE NEWSWIRE) — Under the aegis of the collective ‘Monaco, Capital of Advanced Yachting’ approach, Yacht Club de Monaco is organising another of its Captains’ Forums for superyacht captains, just one of the activities organised by the Captains’ Club which unites 150 professionals with the Captain 500 diploma working on superyachts flying the YCM flag.

The theme for this 26th edition has been developed in partnership with Jutheau Husson, Oceanco and the MB92 Group and focuses on an original yet fundamental topic: Man vs Machine.

A highly decorated physician, he has forged an atypical career: astronaut, best-selling author (The Sky Below) and Founder-CEO of Fluidity Technologies, he is also widely sought-after as a keynote speaker on innovation, risk management, mentorship and leadership in extreme adversity. On 20th May 2009, he became the first astronaut to stand on top of the world, the summit of Everest.

High level debate
His talk will lead into a debate to establish parallels between the worlds of space and sea: how do astronauts prepare, what commitment level is required for their mission, how can superyacht professionals be supported to help them aim for the moon and dream of a vastly improved sector via technology?

Captains Barry Sadler, La Belle Classe Academy instructor, Craig Coker (M/Y Skyfall – 58m) and Luca Triggiani (M/Y Roe – 74m) then pick up the baton. All three will be distilling advice and recommendations to train the right people, ensuring an effective management and leadership method to improve the sector’s human approach to the future.

Machine – lever for the future
Man is becoming ever closer to and dependent on the “Machine”. The relationship between the two is developing largely thanks to the way it can optimise communication. So much is being done behind the scenes so we can interact as easily and intuitively as possible with machines. It is in this area that superyacht captains contribute to the design and build of tomorrow’s yachts.

Their keen eyes are best placed to determine how technology is essential in shaping the superyachts of the future so that their technological features and appeal instil a positive image for the yachting industry. On stage to lead discussions on these issues will be: Armelle Roudaut-Lafon, Director Maritime Affairs, Monaco, Snorre Halvorsen, Senior Executive Advisor for Norwegian Hull Club Risk, Norway, Matteo Morra, Area Sales Manager for Wärtsilä, Italy, and captains Luca Mosca (M/Y Quantum Blue 104m) and Pierre Makdessi (M/Y Najiba 58m).

Rendezvous 9.00am to 12.30pm Thursday 29th September at Yacht Club de Monaco for the 26th Captains’ Forum, held in English, which constitutes a platform of exchange so captains from all walks of life can build and develop the yachting of the future.

A photo accompanying this announcement is available at https://www.globenewswire.com/NewsRoom/AttachmentNg/9d095481-1889-456a-bf94-ae9cf1dee669

The photo is also available at Newscom, www.newscom.com, and via AP PhotoExpress.